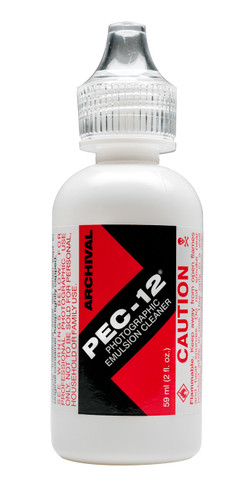 Purity and quality of all Photosol products are guaranteed. The NatureScapes Store is an authorized online retailer of Photosol cleaning products.

Please see the Specifications tab below for additional information.

PEC-12® is safer to use than most other hydrocarbon solvents. It contains no halogens which cause ozone damage and no known or suspected carcinogens. It is less hazardous to health than solvents used in office copier toners. It is also less toxic than many organic solvents found in the typical home. PEC-12® is extremely stable and has an indefinite shelf life when kept in its original container with the cap on.

Like most solvents, PEC-12® is flammable. It must be kept away from open flames and sparks. Do not use in any areas which lack adequate ventilation. Individuals with asthma or other breathing difficulties should avoid inhaling PEC-12 or any solvent vapors. While excessive inhalation may cause dizziness and nausea, a headache will be experienced long before these more serious symptoms occur. At the first sign of a headache, discontinue use and seek fresh air. A headache is also an indication that the ventilation in use is inadequate for ANY darkroom use!

PEC-12® is hygroscopic and it will absorb moisture from the air if left uncapped. This will be evident if PEC-12® begins to wet and swell an emulsion. Discard immediately, by placing the open container outside until it has evaporated. Because PEC-12® is effective at removing finger oils from photographic emulsions, it is only natural that it will dissolve these oils from your skin! This can cause irritation and rashes in individuals with sensitive skin but otherwise will cause only mild dry skin after continued and prolonged exposure. Those with chronic skin conditions, such as eczema should avoid direct contact with PEC-12® for this reason. It will sting open cuts or abrasions. A good quality plastic examination glove should be worn to avoid skin contact should any difficulty be experienced.

PEC-12® has been tested by an independent organization concerned with photographic preservation. It found that PEC-12® will not cause any hidden or long term damage to photographic images. It has no adverse effects on long term black and white or color.

Beware of products sold for cleaning photo materials which contain peroxide formers. These chemicals react with any moisture in the air to form hydrogen peroxide, a strong bleaching agent which can irreparably destroy (by bleaching out) an emulsion. The real danger with these products is that by the time the damage is discovered, it’s too late to save the image.

PEC-12® will damage certain materials such as non-hardened gelatin or albumen emulsions and many dye-sublimation materials. Care should be taken whenever using this product on a print or film of unknown nature, including older black and white and newer black and white processed by fine art photographers. A safety test should be done on each print or film emulsion as described under the heading When NOT to Use PEC-12®.

PEC-12® will remove a wide variety of non-water-soluble residues from photo materials, leaving them grease, oil and ink-free. Among the materials on which PEC-12® can be safely used are:

PEC-12® should be used sparingly as a little bit goes a long way. In most cases, there is no need to apply it directly onto the photo or film. Apply a drop or two onto a PEC PAD, cotton swab, or pad. Don’t drench the applicator with PEC-12® which will waste the solution and will not increase effectiveness. If excessive amounts are applied to an emulsion, there may be a white haze left on the surface when the PEC-12® evaporates. The haze is not harmful and can be easily removed by using a new applicator with less PEC-12®. The haze doesn’t generally appear on prints, and if it appears on a slide/negative, it won’t generally print.

For working on larger films or prints, use the larger size PEC PAD or similar applicator. When using a PEC PAD, simply wipe it across the film/print. See the PEC PAD specifications for complete instructions.

If using other applicators wipe the film lightly, turning the applicator to carry away the grime and bring clean PEC-12® to the emulsion. These other applicators will also require a final wipe with a clean applicator lightly moistened with PEC-12® to remove any lingering residue. The pad itself should look clean after this last application. In some instances, with slide or negative films, one may notice a slight coloring usually magenta (prints) or yellow/green (slides) being removed from the film and discoloring the applicator. This occurs because during processing the final wash tank was not supplied with adequate fresh running water allowing chemical carryover contamination. Any film passing through this wash is thus contaminated with residual chemicals. PEC-12® is removing this residual contamination from the film and actually improving image quality and permanence!

PEC-12® dissolves only non-water based stains. If it is going to work on a particular stain, it will do so immediately. If there is no immediate effect, DON’T apply any pressure to the print or film. That won’t work any better, and non-PEC PAD applicators can scratch the image. An exception to this is cleaning adhesive residues, which may require several applications, a heavier dose of PEC-12®, or a combination of both. But DO NOT RUB HARD in attempting removal.

When cleaning anti-scratch laser-separation oil, use PEC PADs to remove any excess before applying PEC-12®. The preferred method for cleaning film of these contaminants is to pour an ounce or so of PEC-12® into a very small tray or Petri dish. Immerse the film completely in the PEC-12®, agitate LIGHTLY, and remove it after a few seconds.

Films immersed in PEC-12® for extended periods (several hours or more) may develop an excessive reverse curl. This method should also be used when removing lacquer from film, such as found on Kodachrome processed before 1970. Repeat this process of soak/agitate/wipe until all the oil, lacquer, or adhesive has been removed. When the film dries there will remain the haze that results from over-application of PEC-12®, which can be wiped off with a PEC-12 treated PEC PAD. You can save the PEC-12® from this dish for future use (in cleaning the same contaminant) in a separate bottle. NEVER put used PEC-12® back into a container with unused PEC-12®.

PEC-12® is an excellent solvent for removing non-water-based inks and retouching dyes. Before applying it to a print or film, determine that the underlying work surface is not covered with paint or inks which are soluble in PEC-12®. For example, the printed colors and text on most photographic film or paper boxes will dissolve in PEC-12®; they could be picked up by stray solvent and stain the photo being cleaned. It’s safest to work on an un-dyed and unpainted work surface when cleaning a film or print with PEC-12®. Sheets of clean, white, acid-free paper or museum board are ideal.

PEC-12® will remove retouching colors if they are oil-based, and will have a minimum effect on water-based retouching dyes by removing only whatever dyes may be on the surface.

You might consider a switch to pens and ink pads which are removable by PEC-12®. Throw out any pens and ink pads which cannot be removed by PEC-12®. This will provide a safe and reversible means to mark prints/film and insure against accidental, permanent damage. Ink manufacturers may periodically reformulate their inks, so test your pens and pads regularly to make sure they are still PEC-compatible.

PEC-12® will remove mold, mildew and fungus and will do so very easily and very little pressure is needed. They grow on photographic emulsions when film or prints are stored with any humidity in the air, and especially if stored images were subjected to any flooding. These organism actually live by eating the gelatin emulsion which is also what creates the image. So after removal, it may be that you see very little image damage to no image at all. It is not the PEC that destroyed the image—it was the organisms.

It is strongly recommended that when cleaning off mounted transparencies that you remove them from the mount to be sure you can wipe clean the entire piece of film of all growth. Otherwise, organisms are going to be swept under the mount and may reappear. Once cleaned, be sure and store images in a cool dry location.

PEC-12® can be used to clean motion picture film when used as previously described. It is best applied when the film can be rolled from one reel to the other holding a folded PEC PAD moistened with PEC-12®. If you do, be careful that you do not trap grit that will then scratch as you continue to pull film through the PEC PAD. Check the PAD often and replace at slightest hint of anything foreign on it! PEC-12® may also dissolve some splicing solvents or other adhesives if left in contact for extended time, so use caution.

Unhardened or inherently soft emulsions such as inkjet or dye-sub prints, chromogenic films, dye transfer matrix film, albumen, glass plate emulsion, and Polachrome instant slide film should NOT be cleaned with PEC-12®. Chromogenic film is usually marked as such, but not always. For example, black and white film intended for color C41 processing are chromogenic. Some Velvia emulsions may not be suitable for PEC-12®, while other Velvia emulsions are PEC-compatible. Never use PEC-12® on plastic optics or compound lenses of any kind, including camera and enlarging lenses. PEC-12® may cause irreparable damage to such optics by dissolving adhesives or cements used in their construction. For lens cleaning use Photosol’s Eclipse Optic Cleaning Fluid or Aeroclipse Digital Sensor Cleaning Fluid with PEC PADs.

PEC-12® should only be used on photographic materials as specifically intended.

Neither albumen nor unhardened gelatin is commonly found in modern silver halide based films or papers, although they may occur in older or alternative processes. In any such cases where doubt exists, test PEC-12® on an unimportant corner of it, preferably outside of the image area (border). Dab the border with a corner of a PEC PAD which has been lightly moistened with a small amount of PEC-12®. If the solution is going to cause any damage, it will do so immediately by removing the emulsion at that point and create a stringy egg-white-like blob as the PAD is pulled away from the print. If the emulsion is not damaged after a light wipe, PEC-12® will be safe to use. It is important to note that any damage will occur IMMEDIATELY on contact. DO NOT RUB HARD as that WILL cause permanent damage! The only possible exception is with computer generated dye-sublimation prints, which may withstand an initial wipe with PEC-12®, but will smear after a few seconds. It is best to avoid using PEC-12® on these types of prints because of the uncertainty.

Several companies are selling products claiming to provide the same results as PEC-12® and are using very similar product names and packaging. DO NOT BE MISLED! Since 1971, Photosol stands behind the quality of their products. After twelve years and extensive testing, PEC-12® was introduced commercially in 1983. Since then, it has been widely used and endorsed by some of the most respected names in the photographic industry. PEC-12® is also the ONLY cleaner tested by a leading image preservation research institute and their report clearly shows that PEC-12® causes no major ill effects in the short term …or in the long term under the conditions and with the materials tested.

The NatureScapes Store is an authorized online retailer of Photosol cleaning products.