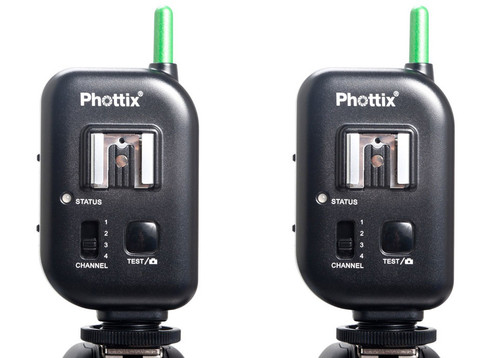 The Phottix Atlas II is the professional choice for reliable wireless flash triggering. Say goodbye to transmitters and receivers to trigger flashes, studio lights, and cameras—one remote will do it all. The Atlas II triggers flashes at sync speeds of up to 1/250 sec.* The system will trigger cameras, flashes and studio lights at distances of 350 meters or more.

The Phottix Atlas II is a transceiver. With the simple change of a switch the Atlas II is ready to either transmit or receive signals. Simplify your off-camera flash triggering; one unit can be used as a transmitter or receiver.

The Atlas II is compatible with Phottix Strato and Odin series TTL triggers. It fits in perfectly with ?ÿPhottix's existing line-up, allowing the power and freedom of a long-range transceiver.?ÿ

Triggering flashes is only one of the Phottix Atlas II functions. It can also be used, with Phottix Accessory Cables, as a wired or wireless shutter release. It now features a two stage shutter button—a half-press will autofocus, a full press takes a photo.

With a hot shoe on the receiver and two 3.5mm sync ports the Phottix Atlas II can be used to easily trigger hot shoe flashes and studio lights.*